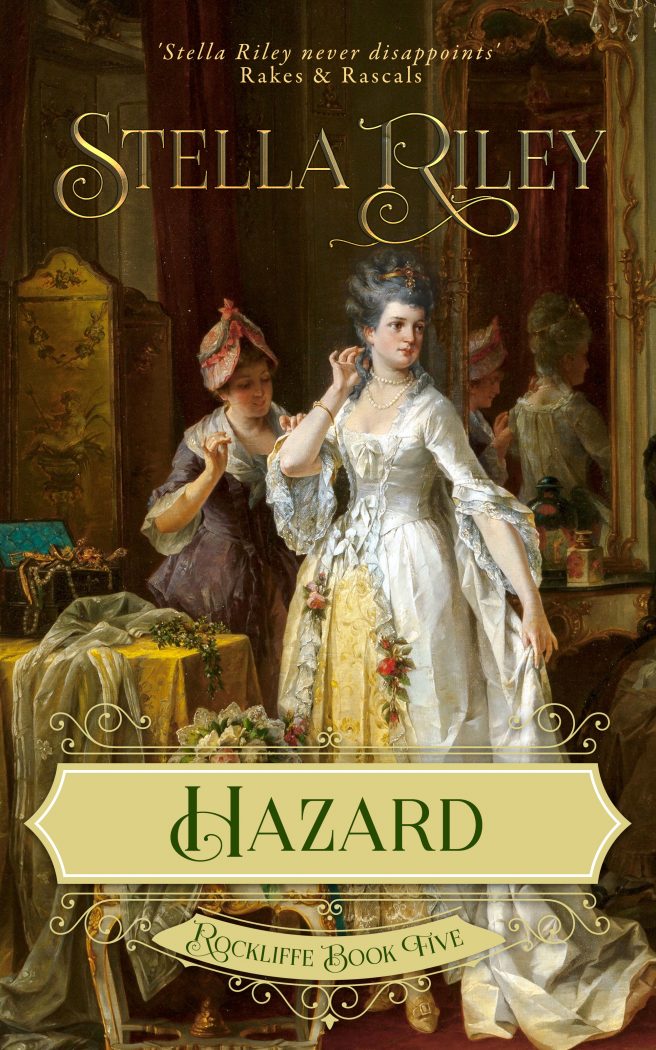 “Hazard is a fabulous addition to this thoroughly enjoyable series of Georgian romances.  Ms. Riley’s writing is sharply focused and elegant, her characters are strongly drawn, the chemistry between the leads is undeniable and both romances are brought to immensely satisfying conclusions. It gets a very strong recommendation.”

Read the complete review by Caz Owens at All About Romance

I’m thrilled to announce that A SPLENDID DEFIANCE has been honoured with a B.R.A.G. Medallion – an award given by readers and only achieved by 20/25% of the books submitted. Never having offered my work for consideration before, this is my very first B.R.A.G. Medallion and is therefore particularly exciting!

Rockliffe Books One to Three, now in a Box Set!

The Parfit Knight, The Mesalliance and The Player – all together in one tidy parcel!  Available from Smashwords and Amazon.

And don’t forget that Rockliffe Four, The Wicked Cousin is currently available for pre-order!

In HAZARD, Lord and Lady Sarre’s house-party takes us once again to my own home turf.  Here are a few pictures of the Ancient Cinque Port of Sandwich  – most of which have changed very little since Adrian’s time.

Let’s start by wandering down to Sandwich Bay …

Marcus would put money, if he’d had any, on Sarre having procured a license; and, if that was the case, there was almost certainly only one place he’d go.  The house in that God-forsaken spot on the east Kent coast that he’d always been so bloody fond of.  (Extract from The Player)

Caroline opened the curtains and found herself gazing across a narrow sand and shingle beach to miles and miles of empty grey ocean.  She shut her eyes and then opened them again.  If one were searching for the bleakest most deserted spot one could find, this should surely qualify.

‘During the reign of Edward the Confessor, Sandwich and four similar ports were grouped together to become known as the Cinque Ports.’
‘The other four being …?’
‘Dover, Hastings, Hythe and Romney,’ said Sarre.  Then, ‘Who is conducting this lesson?’
‘You, my lord,’ replied Caroline severely. ‘But you shouldn’t miss things out.’

Adrian would have recognised his town in this painting.  It shows the bridge over the River Stour and the Barbican; and, dominating the sky-line, St Peter’s church.

A similar view today. Adrian would have known the drawbridge built in 1757, not the more modern swing bridge we have now. But he’d recognise pretty much everything else.

‘The bridge is only about twenty years old,’ he remarked.  ‘I remember it being built. Before that, one had to cross the river by ferry.’  Then, pointing to an odd building comprising two conical parts connected by an arch spanning the road, ‘The Barbican, on the other hand, pre-dates it by over two centuries.  Tolls are payable there for every carriage, cart and cow wishing to use the bridge.’

Caroline strolled along, admiring a row of black-and-white half-timbered houses.  She said, ‘I’ve never been anywhere like this.  It’s charming.’
‘I’m glad you think so.  In the sixteenth century, these houses and others like them were probably occupied by Flemish Huguenots who came here to escape religious persecution.’  He gave her a half-smile.  ‘Many of them, it may interest you to know, were weavers by trade.’

The Guildhall Courtyard where Adrian and Caroline met Mr Bailes.

Sarre took in the thin coat hanging loosely on a too-thin frame and the swollen joints in the rheumatic hands.  Then, turning to Caroline, he said, ‘I’m being very rude.  This gentleman is Mr Bailes.  He was head-gardener at Sarre Park when I was young.  Mr Bailes – this is Mistress Maitland.  She is a friend of mine.’
‘Honoured, Miss.’ Bailes touched his shapeless hat and looked back at the Earl with a sigh. ‘I’m glad to have seen you, m’lord – but I’ll be on my way now.  It’s not right keeping the young lady standing about in the cold.’
His lordship detained him with a hand on his arm.
‘It isn’t – which is why we’ll go over to the Old New Inn so that she can sit by the fire while you tell me everything.’

Inside the church of St Peter …

With no music, no flowers and an openly disapproving vicar, the ceremony was both simple and no longer than necessary.  The ring slid on to her finger, warm from his hand.  She stared at it for a second, transfixed, before looking into his face to discover that he was doing the same thing, his expression oddly intent. Then the silver-grey eyes flicked back to her face and the shadows vanished in a dazzling smile.

This has changed a bit.  These days, St Peter’s is no longer a functioning church – but the curfew bell, telling locals they may let their pigs and geese into the streets is still rung there every evening at 8 pm

And finally, Walmer Castle – scene of the confrontation between Adrian and Marcus.

Marcus swallowed.  ‘Come to gloat, have you?’
No, you malicious ass, answered Adrian silently.  I’ve come to rub your nose in the mess you’ve made of your own life and done your damnedest to make of mine. And to find out why.

Originally built as one of Henry the Eighth’s coastal defences, the castle later became the home of the Lords Warden of the Cinque Ports.  In Adrian’s day the current Lord Warden was the Earl of Holderness.

I hope you’ve enjoyed this brief tour around Adrian’s town.  As you may possibly have guessed, I’m proud to live here.

(Rockliffe, #2) Genre: Historical Romance (Georgian – 1767 and 1775) Cover Blurb: The Duke of Rockliffe is 36 years old, head of his house, and responsible for his young sister, Nell. He is, theref…