When he was twenty-one years old, George Goring married the daughter of the millionaire Earl of Cork. She brought him an impressive dowry of £10,000 – which he soon squandered on cards, dice and debauchery before taking military service in Holland. By the time he was thirty, he had acquired a reputation as a gambler, a libertine and a soldier. 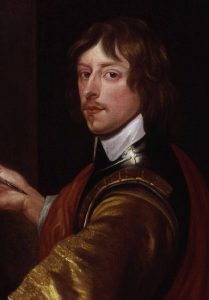 The famous siege of Breda in 1637 left Goring with a shattered ankle, a permanent limp – and presumably also permanent pain – but he didn’t let this stand in his way and, when he returned to England, he accepted the post of Governor of Portsmouth.

The Earl of Clarendon [who plainly didn’t like him!] declared that, ‘he would have broken any trust or done any act of treachery to satisfy an ordinary passion or appetite.’ A severe criticism perhaps, but not unjustified. Goring’s actions between 1640 and 1642 don’t do him much credit. He managed to convince Parliament of his loyalty whilst making Portsmouth a base for the King; he was deeply involved in the Army Plots of 1641 but betrayed both of them to the Commons; and when the Civil War began, he declared openly for Charles 1 but surrendered Portsmouth within a month and decamped for Holland.

He didn’t remain abroad for long. Once back in England, he distinguished himself as a cavalry leader in the north, was taken prisoner in 1643 and released in 1644. He commanded a wing of the Royalist Horse at Marston Moor where he acquitted himself well against Fairfax only to be routed by Cromwell – and it was at this point that the rot seems to have set in. Goring had always been unreliable and was notorious for letting his men run amok. But after Marston Moor he appears to have started hitting the bottle with serious regularity whilst going out of his way to become a thorn in Prince Rupert’s side.

In the latter, he was ably assisted by Lords Wilmot and Digby – the three of them joining forces to intrigue against Rupert and to obstruct him at every turn. Inevitably, this constant ill-feeling and the resulting arguments was to eventually prove disastrous to the King’s cause.

In August 1644, Goring – now Captain of Horse in the West Country – let the Roundhead cavalry slip through his fingers at Lostwithiel but redeemed himself with a gallant showing at the battle of Newbury two months later. However, the following year saw him refusing to join Rupert before the battle of Naseby, preferring to spend his time in idle, largely drunken resentment – occasionally punctuated by bursts of action. During the next few months, he lost Taunton and caused a local rebellion by letting his men loot homes and kill livestock. By the time the Roundheads wiped him out at Langport in July 1645, he was widely regarded as ‘the evil genius of the war in the West‘.

With the King’s cause past saving, Goring went to the Netherlands and, from there, to command English regiments in Spanish service. He was to spend the rest of his days there, dying in Madrid in 1657.

So what do we make of this man who, both during his lifetime and long after it, was either loved or reviled? Egotistical, charismatic, pleasure-seeking, wasteful, intelligent, quarrelsome, brave? All of those things, probably. He had a way with the ladies and was the kind of rakehell more commonly found after the Restoration. He diced and whored and drank … but he also had a natural military talent and the ability to inspire men. He was wildly ambitious – and equally wildly irresponsible; and though he possessed the potential for brilliance, he rarely achieved it.

Nowadays, a lot of people probably consider swaggering, hard-drinking, sword-out-at-the-drop-of-a-hat George Goring to be a typical Cavalier. I don’t think this is true. He was more than those things – and many of his contemporaries were none of them. But there seems little doubt that he was one of the Roaring Boys.